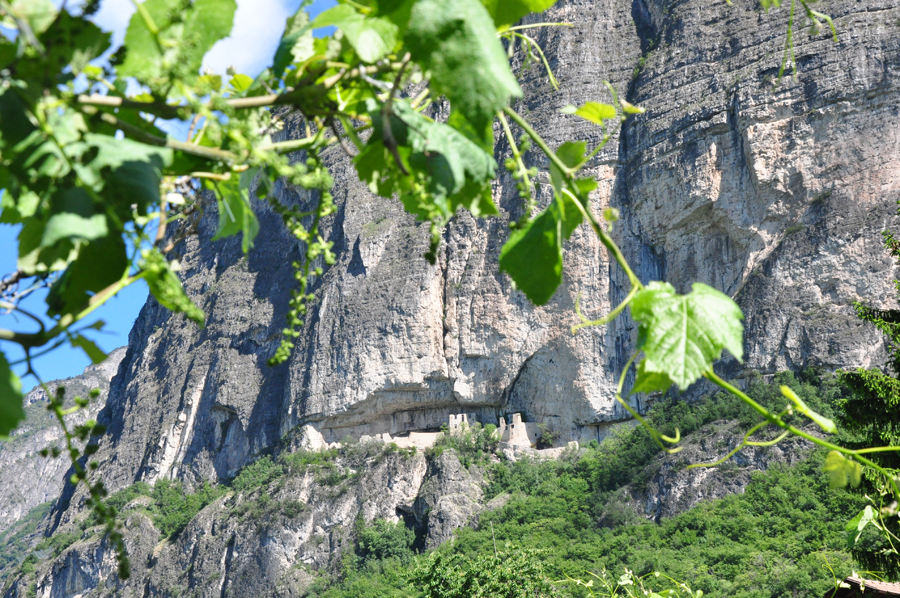 The legend of the Dragon

Lechthaler was founded in Mezzocorona, a village neighboring Rovere della Luna, in the heart of the Piana Rotaliana. Here sits Castel San Gottardo, a rare example of Corona, a type of medieval construction within a cavern. This castle was built in 1100 and was once part of the kingdom of Trento. It is located in a spectacular location, nestled on a sheer cliff above the village and is famous as the home of a legendary dragon... Legend has it that the ruins of the castle housed a basilisk, an animal similar to a winged serpent, covered with bony scales that made him invincible. From this pleasant abode the dragon terrorized the inhabitants of the Piana Rotaliana, eating the village people and animals and destroying the crops. That is, until Count Firmian decided to battle the dragon, armed with a spear, armor and his own shrewdness. Under cover of night, the brave count climbed up to the castle and placed a mirror and a bucket of milk at the entrance of the cave. When the Basilisk awoke, he went to drink the bucket of milk and saw... another dragon. Standing up to “welcome” a fellow monster, the Basilisk gave Count Firmian the opportunity to jump out of hiding and plunge his sword straight into the creature’s heart. The count wanted to cut off the dragon’s head to parade it in front to his subjects, but the dragon’s purple, poisonous blood covered the count, turning him into a pile of ash. The hero was buried with full honors and his story has been handed down generation after generation ever since. It is said that close to the eternal resting place of the count sprouted the fi rst vine of Teroldego.

To commemorate our origins, we decided to use the image of the dragon on the Lechthaler labels, a symbol of Trentino Alto Adige’s enological tradition.